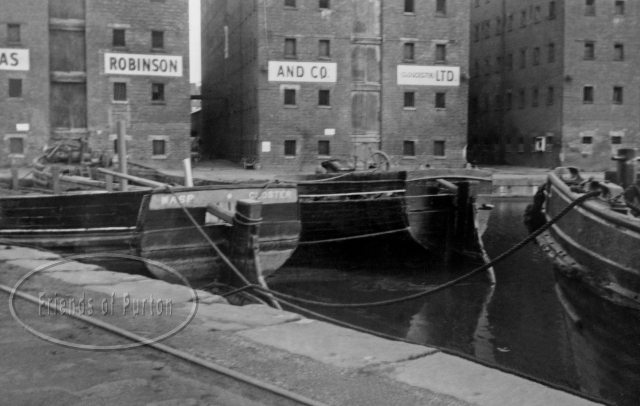 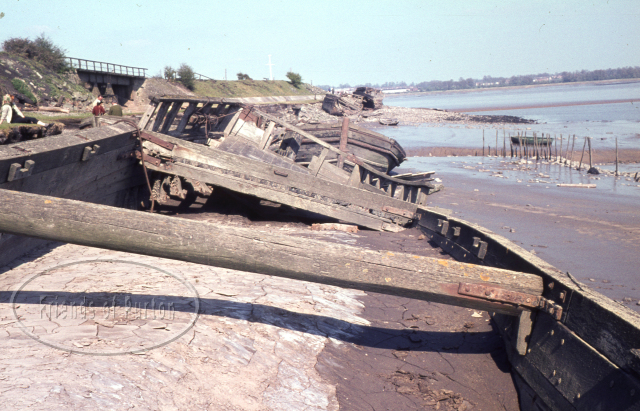 Wasps cargo hold within the hulks at Lyndey

Similar to Purton, vessels which had been selected to be beached at Lydney, where placed behind at tug, and taken into the river just prior to high tide. This of course would result in the tug and its tow reaching the far flung shore line at the head of the tide. Once there, instead of heading for a pre-marked out position at right angles to the shore, the tug would move from North to South along the shore, whereby upon reaching the allotted space, the tow would be slipped and the hulked vessel would have her bow guided shoreward of any exiting tethered vessels thus effectively adding her length and strength to the ever extending line of shore defences. Once positioned correctly, the bow and stern would be holed as before in order to ensure her final resting place was maintained. – God willing! 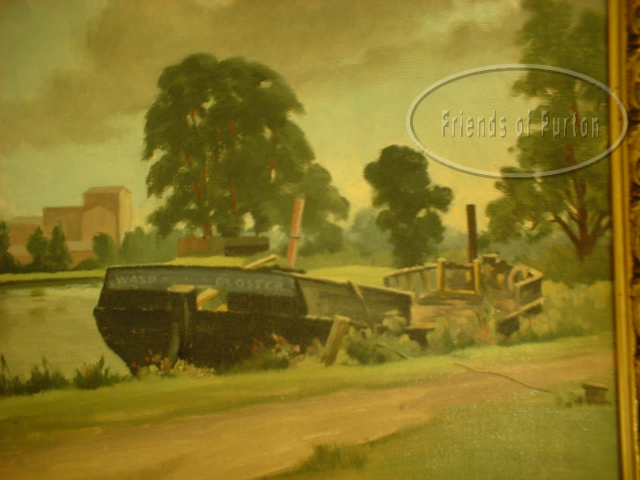 DF recall that his remit increased as a result of the British Waterway purchase of the Lydney Docks, hinterland and seven coal hoists from the South Wales Dock Company. DF furthermore stated that it soon became apparent the Lydney’s dock wall and adjacent river bank were also prown to erosion and this resulted in the British Waterways abandonment, of 3 – 4 hulks on the foreshore to act as breakwaters, including the Gloucester registered lighters  Ripple, Llantony and the Wasp.
It was at this time that DF recalls as a result of his curiosity he became personally involved in the abandonment of the wooden barge Wasp on Lydney foreshore by the Tug Resolute skippered by Oliver Powel. Furthermore it was during this operation the DF realised the true extent of the dangers associated with the towing and beaching of an un seaworthy vessel during a spring tide upon a river that is noted for having the second highest tidal range in the world. DF recalls that the operation started ordinarily enough as the Resolute left Sharpness Dock 15 min prior to high-water with the view that they would reach the Lydney shore at High-water. However upon reaching mid river the crew of the Wasp reported to Capt. Powel that the barge had sprung various leaks and was rapidly filling with water. To wit, it was decided that the Tug should, as previous planned, continue steam at full pace toward the shore with the view to beaching the vessel successfully and thus gain payment. Failing that and should the vessel sink the barge crew were orders to “swim for the shore and the Resolute would pick them up whilst the tug deckhand was to remain on standbye to part the tow rope with an axe and thus prevent the loss of the Tug”. All in a days work.

At Kew, I found that the schooner Dispatch of Inverness, Capt Evans, visited Gloucester several times during 1932, each time loading 190 tons salt for an Irish port. The lighter Hannah of Gloucester, Capt White, arrived at Sharpness from Avomouth with 133 tons wheat on 13 Jun 1934 and departed for Porlock with 100 tons coal on 23 Aug 1934. Both these entries were in RAIL 864/57. The registers stop before the Wasp’s visit in 1950.

Bob Marrows
Paul,
The three postcard size photo’s of trows at Gloucester Docks were delivered yesterday.  Unfortunately, none are of high quality, but all have since received some Photoshop treatment.
The third trow proved not to be HIGRE but instead the former barge RIPPLE.  All three photographs are noted as having been taken in September 1950.

Additional notes on the backs of the prints read as follows: