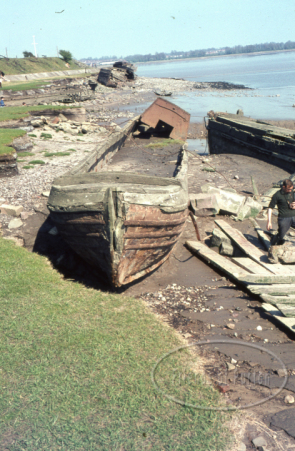 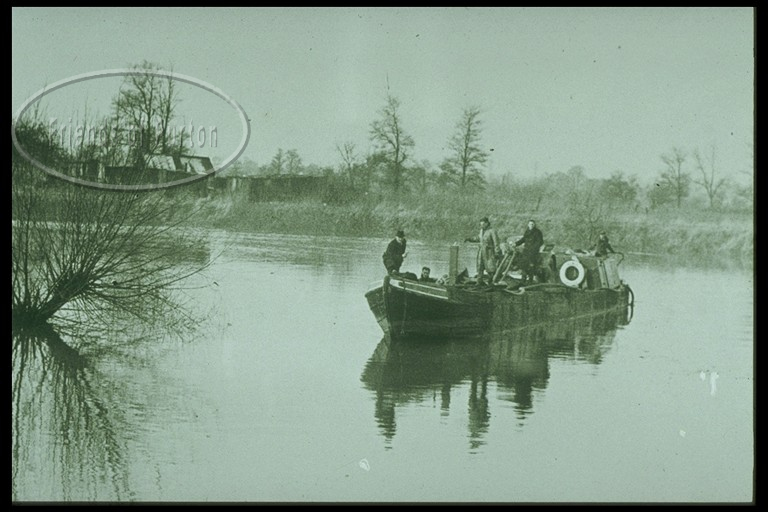 What little that is known about this strange little timber canal boat is contained in below other that Fred Rowbotham record the vessel was once in the employ of the River Severn Catchment Board (RSCB) to transport men and plant the length and breadth of the River Severn whilst in engaged in bank protection work. Indeed one of the very few images of her has her utilising an onboard
compressor during one of her frequent engine failure to limp home. The keen eyed will note the warmly dressed pipe smoking Fred amidships. Outside of these scrape of info – more research is therefore definitely ongoing and will be added here as it is made available

Many thanks for the photos of Venus. I think you said that you thought she was a metal hulled boat, but close inspection of the pictures reveals her to be of wooden construction. The rusty metal which can be seen around the bows is thin steel sheet which is nailed on to protect the wood from ice damage when ice breaking in weather such as we are having now. It is known as ice plating and was standard practice on wooden narrow boats, usually fitted around the bow and along the waterline. Ice could cause considerable damage to an unprotected wooden hull, cutting into the wood and ripping out caulking along exposed seams.
The engine room casing is clearly steel.

If you want to know more about Venus there are people with detailed archives about narrow boat history; it may be possible to find out more about where she was built and who she worked for. The Historic Narrow Boat Owners Club might be able to help – www.hnboc.org.uk . There is also a man called Pete Harrison who has a lot of records about old narrow boats. I do not have his contact details but could probably get hold of him via my son.

You are very welcome to put a link to our Beatty website onto www.friendsofpurton.org.uk. My son looks after www.nbbeatty.co.uk ; I will ask him to reciprocate.

I will start looking for my 1987 photos of the Purton Hulks; don’t hold your breath. It will probably be after Christmas before I have time to scan them.