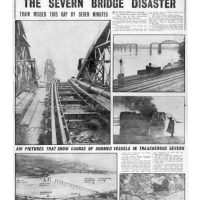 Disaster on the Severn … 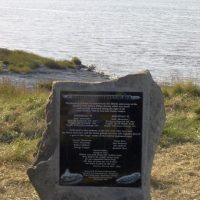 Never to be Forgotten … 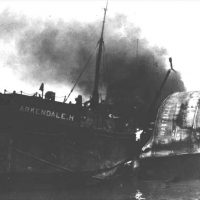 A Night to Remember … 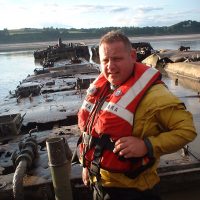 An Exhibition by The Friends of Purton 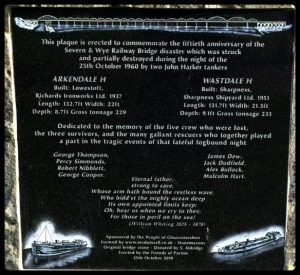 Sunday the 17th October 2010 saw early morning river fog roll up the Severn estuary almost in serine remembrance to similar conditions some fifty years ago the night 25th October 1960 the night the river burned to snatch five lives and alter the course of Gloucestershire history forever.

Fifty years on, Lydney Docks saw early Autumn sun soon melt the last fingers of mist to unveil a sombre gathering of some 200 family members, old friends, former neighbours, and invited guests, all who had come together to remember 10 local men who left loved ones to work on the river that night, some never to return.

The event, orchestrated by the Friends of Purton, was the first of several tributes to mark the 50 years since the partial destruction of the Severn and Wye Railway bridge by the fully laden John Harker tankers Arkendale H and the Wastdale H, which came together in a ball of flames killing five of the eight man crew.

During an emotional ceremony, a two ton block of recovered bridge stone was unveiled to reveal poignant images of the 21 span bridge, the vessels and the eight men’s names, all of whom have now passed away.

Following a reading of the crew men’s names by Friends patron David Drew, the gathered observed a minutes silence accompanied by the faint chiming of distant church bells which were to rung out the entire length of the river to remember the dead.

This was then followed by a slow procession the short distance by road to the Dean Heritage Centre at Soudly, where the official exhibition was formally opened by the Family of the late Thomas Carter in recognition of his and Charlie Henderson gallant rescue attempt to pull the eight family men from the burning waters. During this quiet time of reflection, the families of rescued man Jack Cooper and Mr Carters daughter, who until that day had never meet, were allowed time to share one common grief.

Time and tide against them the gathering moved off as one to travel the 40 mile through the sunlight streets of Gloucester after first crossing the mighty river at Over, to arrive at its final destination in the quiet hamlet of Purton within sight and overlooking the twisted remains of their men folk’ stranded tankers.

Patiently waiting and in attendance were several local dignitaries, with Stroud MP Neil Carmichael presiding to unveil an identical stone memorial, placed on a diagonal tangent to the adjacent Lydney docks effectively intersecting the tanker remains.

Standing shoulder to shoulder, the party assembled silenced in grief and with the sun high above, witnessed the tankers slowly slip below the black waters of the Severn. Gripped with their own memories of loved ones lost but now at last recognised for the sacrifice each made.

Then around the backdrop of Sharpness point, came the distinct silhouette of two solitary historic R.N.L.I. life boats, once more fiercely punching the rushing waters to arrive at the crash site, only this time the precious cargo was one of the combined sadness of nine family members intent on paying their last respects in person with flowers, trinkets and tears.

Nearby excitement rippled through the those on the shore as they watched with further poignancy of what might have been, as in attendance followed two fast inshore rescue boats of the now Sharpness based Severn Area Rescue Association,

Once positioned atop the site of the former bridge pier 17, instructions were issued for the crews of Nellie & Charlie and the aptly named Always Ready to haul too, the silence was broken via ship to shore radio by Robina Bayliss daughter of the Arkendale H survivor in order to address the assembled party, her voice trembling and her pain clear for all to hear.

Wreath cast, and heading north on the current, past the waiting families, the flotilla turned south to leave the scene accompanied by the haunting sound of Capt Bevis Musk’ remark ‘lifeboat Nellie & Charlie to lifeboat The Always Ready, lets take them home Craig’.

To sail is to sea
To try is to be

A Night to Remember

On 25th October 1960 we knew part of the bridge had collapsed during the night but we set off for Lydney Grammar School as normal and British Railways somehow got us to Lydney. I don’t remember when I first saw the gap in the bridge, we would have been looking as we approached Purton Severn_rail_bridge ‘on the other side’ as our train went down the track by the side of the river on our way from Gloucester but perhaps it was too foggy to see the gap. I do remember arriving late to school. Because there was no gas in the Lydney area that day we had sandwiches for dinner; the Forest of Dean 12 inch gas main had been carried across the bridge. Somehow at the end of the day we got home. The routine settled down to cycling to the station and catching the train to Berkeley Road. Most of those from Purton now cycled to Berkeley Road rather than Sharpness as they had done in the past. We caught the mainline Sheffield train up to Gloucester Eastgate, walked across the long footbridge to Gloucester Central and then caught the Cheltenham-Cardiff diesel multiple unit to Lydney Junction. For a while we then took a branch line train to Lydney Town and walked up to the school but soon we were taken by coach from Lydney Junction directly to school. We arrived in time for first lesson and at the end of the day we missed the last lesson. For the return journey a coach took us to Lydney Junction and a train consisting of a couple of coaches pulled by a 1400 class 0-4-2t was used for the journey all the way back. Quite a few of us used to stay at school for the last lesson on some days of the week. The journey home was then to walk to Lydney Junction, catch a train to Gloucester Central, walk over to Eastgate, change at Berkeley Road and I would be cycling back into Berkeley at gone 6 o’clock. We got quite good at getting homework done on the train.

One morning in the following February we saw something we knew nothing about. We were on our way from Gloucester travelling alongside the river when we saw an upturned tanker drifting on the tide. It seems the BP Explorer had turned over on her way to Sharpness the previous evening and her failure to reach port was not noticed. News about this had not spread through Sharpness by the time the train had left; we didn’t know which tanker it was. There will have been very few of us who did not know someone whose work was connected to the river and several were related to crew working on the tankers. Of those making that journey every day two went on to become River Pilots

First published in The Clangour,(August 2010)the Newsletter of the Wotton-under-Edge Branch of the G.&B. D.A. of Church Bell Ringers:

The night the bridge came down we were living in a bungalow right next to the old gas yard. It was about 9:45pm. We were just going to bed when there was a large explosion. We looked out of the back window, through the fog, and could see a red glow. I said to my wife “Let’s get out of here,” so we went up on to the high bridge where we could see the glow was coming from the river. It was so foggy that night, we could not see what had happened. By then, there were a lot of people on the bridge.

Someone came and said that two tankers had had missed the lock entrance. We knew, then, that they had hit some part of the bridge. It seemed as though all the river was on fire. We could smell oil and petrol burning, it was horrible. We could hear the men off the tankers shouting for help. Then the tide turned, which brought the flames back, so they had to shut the lock gates, so no boat could go out to pick anyone up. I was told later that someone from Purton took a boat from the breakwater and picked someone up from the Gatcombe side of the river.

Then, we were told the tankers had hit the bridge and the gas main had broken, which supplied the Forest of Dean. The gasometer next to our bungalow went down like a punctured balloon. We had to get out while it was made safe. We were back about 12 o’clock. We could not see what damage had been done until the next day, when I got up about 6:30am and went back up on the bridge where I could see the damage to the bridge span. The two barges were out on the sand, still burning.

What a night that was to remember, 25th October 1960 – you always had that fear of looking out of the window and seeing that ball of flames going up again. Unbelievable.

I went to work the next day and had a call from the Waterways’ engineers for me to meet them at the bridge site with Railway engineers. It was quite frightening to look along the bridge and see the bent rails, a large gap where the spans were missing and the gas main all broken away. The gas pipe going across must have gone up like a blow lamp. It stayed like that until 1967 when a crane was brought over to lift the spans off, one by one. Most went for scrap, some were re-used. 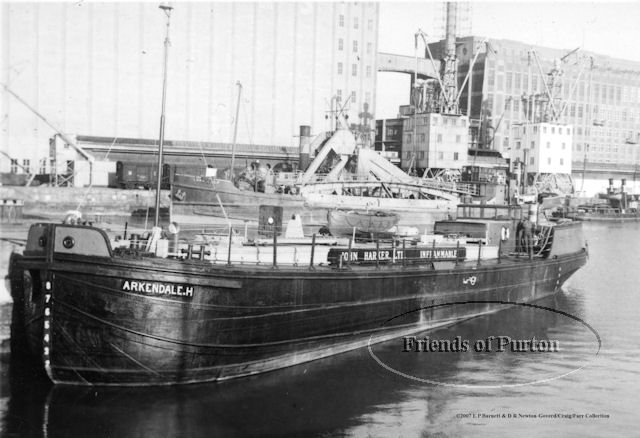 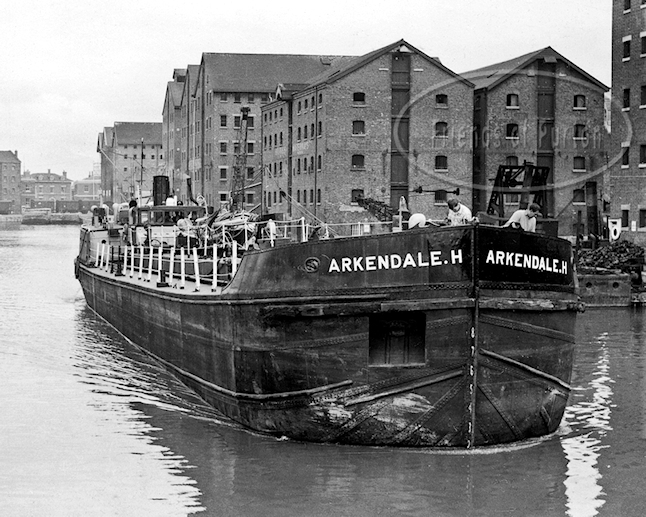 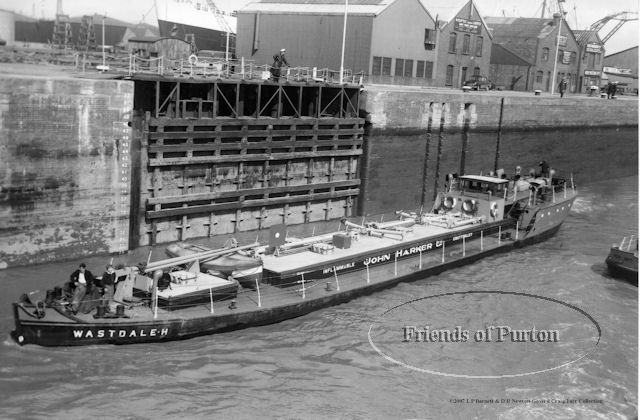 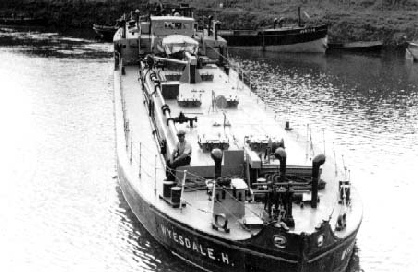