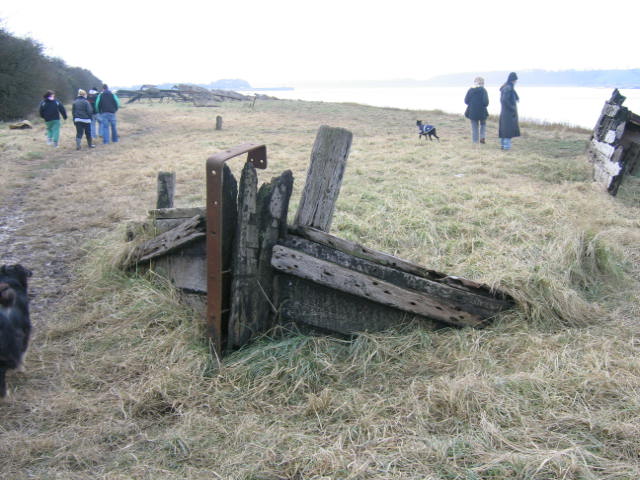 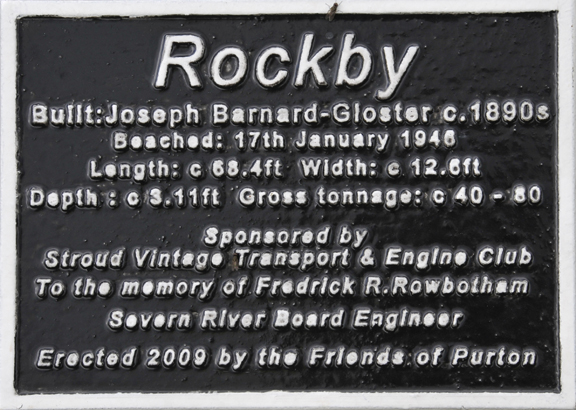 The Rockby is one of the six examples of canoe stern barges known to exist at the site which as a result is therefore considered to be one of the largest collections of this type of rare design.

Due to rapid silt deposition and heavy overburden to depths of c. 1.25m, it is believed that the Rockby is virtually intact with the majority of her interred timbers being in situ and preserved to a good level.

Exposed bow timbers are continually at risk from anthropogenic activity including the 2007 destruction of 1m3 (30% of exposed timbers) of foredeck oak planting for use as BBQ fuel.

Following her construction using Forest of Dean sourced oak by Joseph Barnard at his Hempsted yard (Conway Jones 2008 per comms), the Rockby is understood to be have been primarily employed by the Gloucester based lighterage company, George Thomas Beard, for the transport of timber deals from Sharpness timber merchants to supply Gloucester’s inexhaustible hunger for construction timber and to Morelands Match Factory located on the towns Bristol Road. These duties are clearly illustrated in a recently discovered Graham Farr photograph which clearly shows the Rockby laden with timber deals, tied up along side timber warehouses at Canada Wharf in August 1934.
Very little is actually known about this vessel as it rarely appears in archives and was not required to be registered formally in the Gloucester Port Registers, possibly due to its use for inland waterways only (Barnett 2008). Its abandonment is one of only two such events which are officially recorded within documents held in the Gloucestershire Records Office. The Port Book includes the following entry:
Rocky (derelict)(lt) 17.01.1946 Avonmouth MT To Severn
Once located the Rockby very quickly filled with riverine silt, which appears to have been laid down evenly thus providing adequate support whilst affording effective protection and preservation of the timber. Furthermore the later location of the Severn Collier astride and on top of the Rockby may have in part damaged timbers but will have in the main, provided further protection from the elements.
And there she lies, slowly being reclaimed by estuary muds and sands. Today only her bow timbers break the surface of the swath, at peace. At least she would at be at peace if we overlooked recent anthropogenic destructive activity and the 2007 determined harvesting of her foredeck planks by a family of three generations to prepare a BBQ lunch, using a rare piece of Gloucestershire maritime culture as fuel.
Is this any way to treat a nations history? 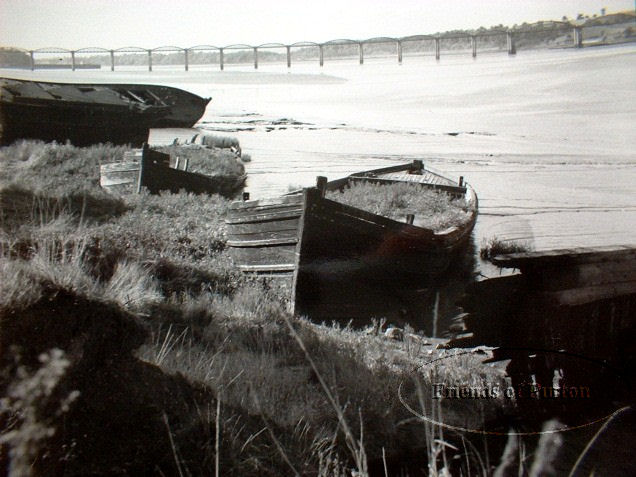 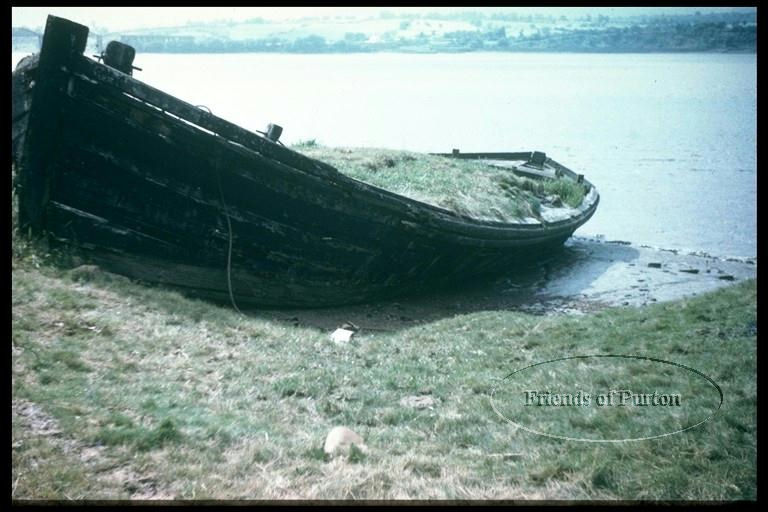 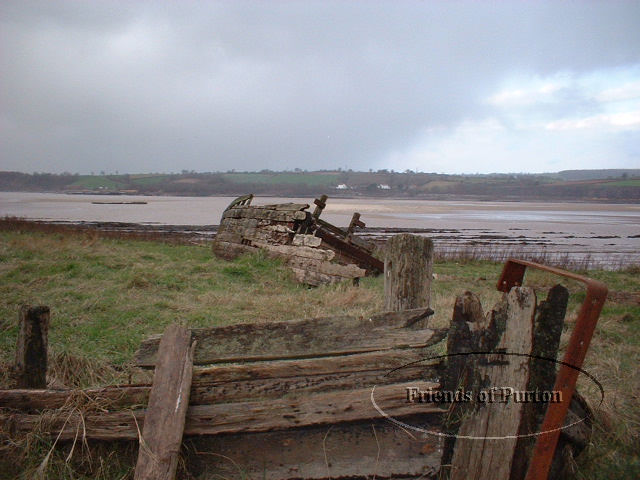 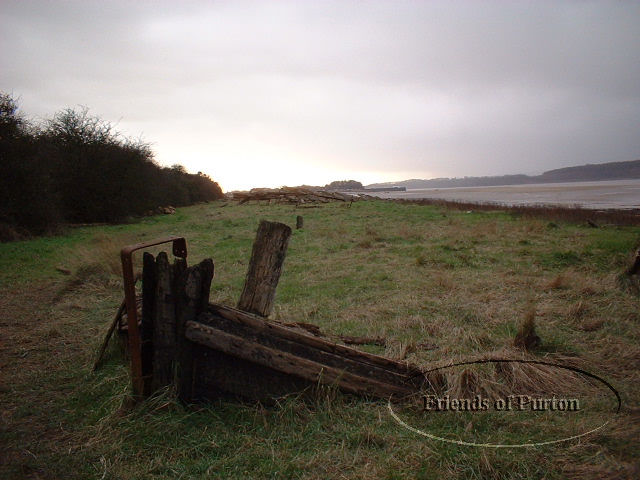 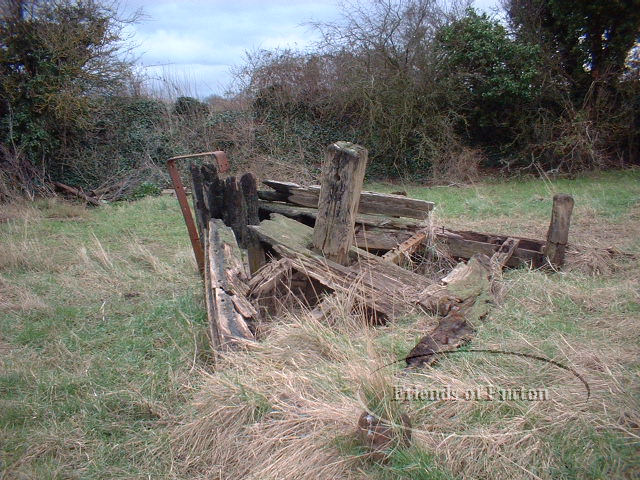 Crew member of the Tugs Addie, Resolute and Primrose. Date of interview 19.06.03
Mr Langford identified the Rockby as a barged on the bank at Purton and recalls that she was had painted bows and stern.

Skipper of the tug Speedwell and canal employee. Date of interview 29.06.03
Mr Ray Savage did not identify the Rockby being to the best of his knowledge.at Purtonteam engine, however he further states that he always recalls her as a towed barge. Furthermore Charlie stated that the photograph of the Shamrock was taken by Jobert Miles the former Sharpness garage owner and whose son now runs the business.

Maritime Journalist listed the vessels at Purton as of 22nd April 1957 and identified the barge Rockby as being present. Furthermore earlier photographs taken by Mr Schopland during a visit of 21st September 1951 shows the Rockby in situ.

Physical description and named by Mr Wheeler in 1957. Furthermore he listed the vessel in his later visit of June 1965 as Wooden vessel (Rockby).