It is with the saddest of hearts, that we write to advise yet another valued elder Friend of Purton has gone over.  Ron Manns husband and close support to Wendy, has recently died. Active for many years within the society, always on hand to offer advise and in-depth knowledge to any site visitor.  Ron always gave freely of himself in the steadfast promotion of the wonders of Purton, not just the hulks, but the village as a whole.  Our condolences to dearest Wendy.

Ron will live on in the hearts of many who came to share Jonadab, Ron and Wendy’s adopted Purton Hulk. 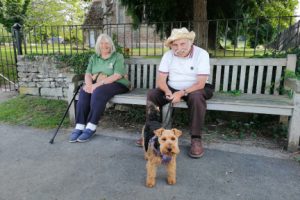 Government COVID restrictions willing,  we are pleased to announce a full programme of Lydney ‘graveyard’ tours for next year.

Due to objections, by local resident, tours of Purton ‘graveyard’ are suspended until further notice.

At Lydney; hear the real life stories behind the site, the vessels and people involved. Tales of  fun, mystery and tragedy.

'Harriett' Gets a Make Over

Our friends at Canals And Rivers Trust have given the icon barge Harriett a spring clean. The grand old lady, a Scheduled Monument and Historic Ships Registered renowned vessel has been cleared of the encroaching vegetation and litter. Ship shape and Bristol fashion once again, she is ready for the return of visitors to the graveyard.

Director Michael McGlinn, assisted by cameraman Jörg Hammermeister and his asssistant Stefan Tuchel visited Purton Graveyard to record an article intended for broadcasting on European TV. During the time at the site Michael, and the team, recorded footage of interviews with Friends members. Later this was edited with land and drone imagery added. 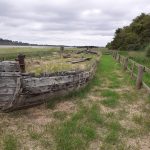 Time and tide, as they say, waits for no man. And it is the Friends sad duty to advise of a recent partial collapse of Dispatch, one of the sites most prominent ships. Built in Garmouth on the Spey in 1888, this little schooners timbers have lain on the Purton foreshore since 1958. However a recent inspection of the site has revealed an 8 foot section of her port bow has succumbed to natural forces, and is now on the muddy foreshore.

Six plaques have been renewed or replaced following recent incidences of vandalism and theft. The ‘Friends’ are indebted to  Severn Signs and CCA Fabrication Ltd for their expertise and donation of time to achieve this.  Further thanks are offer to Canals and Rivers Trust and Mr Martyn Slater for their support.

Further donations are always welcome to help the ‘Friends’ record our maritime history. See ‘About’ page of this website for details.

Lost Ships of the Severn Sea – Twenty years in the writing – due for release early January 2020 with over 350 BW and colour images detailing – reidentifying Gloucestershires lost maritime past at Purton, Sharpness and Lydney. Advanced orders for first edition signed copies now being taken via Barnadillo@aol.com A must for all lovers of local history and the counties rich heritage. For more information click

The ‘Friends’ once again took to the road when we joined with the guys and gals of the Severn Vale Vintage Tractor Society for their vintage fair at Stoke Orchard near Cheltenham. Despite the inclement weather and wet conditions, the society braved the elements to put on an entertaining show involving vintage tractors, classic cars, trade tents, shire horses and much more.The ‘Friends’ would like to congratulate the Vintage Society on raising over £1000 for charity from the event.

When, in 2004, the originally Lydney beached vessel, Jonadab surrendered part of her hull to the vastness of River Severn. Which in turn set it down to rest on the Purton foreshore, she inextricably linked the two Gloucestershire locations.

Subsequently identified, and thereafter welcomed as a Purton hulk, she initiated a programme of research, that became known as the Lydney Project. Many years in the assembling, the ‘Friends’ are now thrilled to announce that the final touches are now being put to this extensive project, which it is to be published here soon.

Detailing the research of Jonadab and her many sisters who lay scattered in and along the foreshore of the harbour of Lydney, the project followed the previously applied mantra of ‘Preservation through Documentation’ as adopted by the now famous Purton site.

The ‘Friends’, as always, welcome feedback, observations and most importantly contributions towards this research into a long since forgotten Gloucestershire maritime past.

Recent visitors to the hulks will have recognized the site has undergone a major face lift both with the newly erected plaques and the removal of scrub bramble which threatened to obliterate several FCBs within the northern section of the collection. This was achieved whilst being mindful of environmental restraints of bird nesting season and the need to conserve native vegetation by removing the invasive growth of bramble and thus opening the site to the breathtaking vistas across the Severn Estuary. The ‘Friends’ are once again indebted to our very own Doug Jones of D. A. Jones Landscaping who enlisted the help of Mark Wroots, Agricultural Contractor, who in turn put his mechanical flail to great use. The ‘Friends’ wish to thank both companies for their kind donation of time, machinery and valued assistance in the task.

Despite this being the 20th year of ongoing research by ‘Friends’ Chairman Paul Barnett, he is overjoyed with the recent discovery of a rather grainy and dog eared image taken in September of 1950, of the stern of the Saul built trow the J & A.R. In the photograph, as kindly donated to the ‘Friends’ by eminent local aJ&ARuthor Robert Marrow, the little trow is seen empty in Gloucester’s Victoria basin amongst a fleet of steel lighters. Upon its discovery Paul stated, “ it just goes to show that regardless of time, the site continues to unearth its secrets and enlighten us by such rare finds which are becoming ever fewer as time goes by. Further and in response to Robs immensely kind gesture of sharing his recent acquisition, I am thrilled to be assisting with Robs latest project to document Lydney harbour and its maritime use by the Severn and Wye Railway Co., which is soon due for publication. Thank you Bob from all of your ‘Friends’ here at Purton”

The ‘Friends’ were honoured to be invited to take part in the recent annual awards ceremony hosted by the Stroud Vintage Transport & Engine Club (SVTEC). A group of volunteers responsible for running the prestigious Gloucestershire Vintage and CounSVTEC1try Extravaganza.
During its forty-four-year history SVTEC has raised, and continue to raise, many thousands of pounds for deserving causes. As one of the recipients of this years ‘heritage transport’ awards the ‘Friends’ were thrilled to be presented with a generous cheque to aid the continual work of maintaining the Purton site for future generations. The ‘Friends’ would like to say a huge thank you to all at SVTEC for this award and wish them continued success for the future.