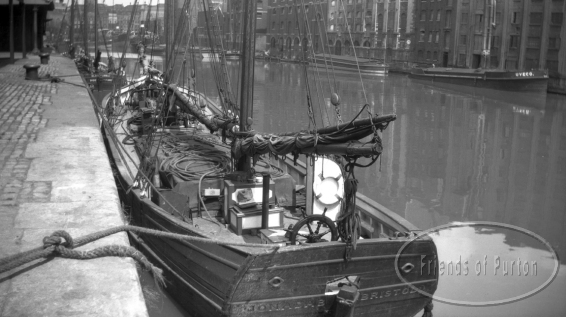 Jonadab at dock in Bristol 1934

To say the Jonadab had a history, is of course and understatement. But as the below letter from 2005 states, the author has tried for many years to unravel her complex trials and tribulations passing as she did from owner to owner, this hardy little trow has had many manifestations from sailing to motor to barge. Traveling far and wide as recorded, to Ireland and Greece, Jonadab was over 112 years old when she eventually sprung her fatal leak which saw her turn back to Lydney with her fully laden hold of St Annes Board Mill consignment of coal. This was sadly to be her last manned voyage as further to a structural survey her forelorn remains where beached high and dry to protect the harbours vulnerable southern shore and magnificent block built pier. Once there, children were known to clamber aboard and ride out flooding waters as the vessel raised from the shore only to return with the receding tide. That being the case Jonadabs back was soon to be broken – defeated but not out, as the little ship was to prove she was far from beaten, as she made one last dash for the high seas in 1975, after breaking from her Lydney bonds and sailing to Sharpness unmanned only to founder in the entrance of the busy Severnside Port. Once recaptured her remains were close hauled to a nearby sandbar – only to wash ashore at Purton in 2004 – home at last perhaps!

I recently came across your letter in the June 1975 edition of Sea Breezes, in which you requested information relating to the remains of the Severn trow Jonadab as situated on the banks of the River Severn adjacent to Lydney harbour.

As a result and in light of my own research, could I request any information that you may have, relating to this or any of the other abandoned vessels, that have sadly succumbed to the ravages of time are now no longer present.

This would be immensely helpful, as I am currently involved in a programme of research for the Sites & Monuments Record, in which I intend to draft a paper that identifies, charts and records a potted history of all vessels within the River Severn and which will include the remains at both the Lydney and Purton sites.

Furthermore, I would welcome the opportunity to discuss my finding with you in person and as such, would you please contact me as your time allows or failing that, feel completely at ease to issue my contact details to any other interested parties who may be able to assist.

Yours sincerely and with thanks

EA also recalls that the following masters were in command of the wooden trows Hannah Capt. S. White and Jonadab Capt. W. James which are now both on the Lydney foreshore

(*LPB Hannah is known to have wrecked on Lundy) 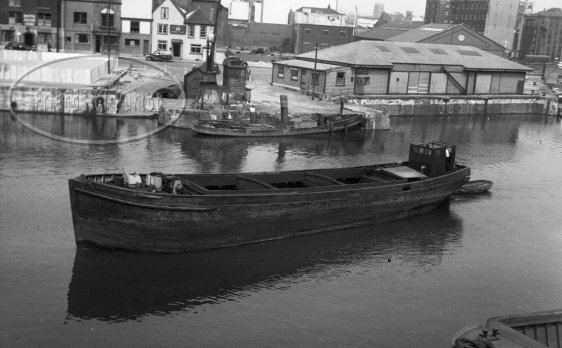 Telephone call received from Richard to advise that his great grandmother Laura James of Saul owned the Jonadab (died 1914/5 buried in Saul Church Yard).  Following this his Grandfather sailed in her until her sale in 1920, he also advised that he has a painting of the Jonadab in 1856 off Falmouth

Dear Paul
Following my email I was pleased to talk with you last week regarding the Jonadab.  As mentioned, I have a particular interest and affection for her as she was at one time owned and traded by my paternal great-grandmother, Laura James of Saul and her husband William (Billie) (both subsequently buried in Saul Churchyard) and later by my grandfather, Stuart, up until she was sold in about 1920.
Initially my interest was restricted to an oil painting of Jonadab in the family, originally commissioned by my great-grandparents in 1896, and showing her in full sail off The Lizard.  This is now in my possession having been bequeathed to me.  Subsequently I came across an old photograph of her in a book ‘West Coast Shipping’ by M. K. Stammers in 1976 and tracked it down as one of several old glass plates in the Bristol Museum archives.  This photograph subsequently appeared in Colin Green’s book ‘Severn Traders’ in 1999, with which you are obviously familiar and contains most of the documented history of Jonadab.
From the various information available, I have put together her history for the benefit of my family (including your confirmation regarding a few timbers salvaged for use in the Lydney Sailing Club bar) as follows:
Mr Richard Langford
Richard James (Independent research)
The Severn Trow ‘JONADAB’
Built 1848 – Newport, Monmouthshire
Originally built in 1848 by John Johns at Newport, Monmouthshire for John Davies, a builder, she was an open moulded trow of some 59 tons.  First registered at Newport this changed in 1856 to Bristol when she was bought by her then Master, James Facey.
According to the Customs Register she was then purchased ‘at twelve noon’ on the 30th August 1894 by Mrs Laura James and rebuilt in 1895 at Saul Junction on the River Severn in Gloucestershire as a flush-decked vessel (also known as ‘boxed’). This raised the freeboard which would enable her to venture further afield from the Severn Estuary and Bristol Channel and handle the strong seas off Ireland and the South and South West Coasts of England.  She was also given a trow rig which may suggest that originally she might have been square rigged.
Between 1894 and about 1920 she was worked by Laura James and her husband, Captain W.J. (Billie) James, later joined by their son, Stuart.  She traded mainly between the various Severn Estuary , Bristol Channel and West Coast ports of Devon, Cornwall and South and West Wales, but occasionally sailed around into the English Channel (Falmouth, Looe, Fowey) and across to Southern Ireland (particularly Waterford).  She would have carried general cargoes including coal (from the Forest of Dean), stone bricks, livestock and animal feedstuffs.
Records show that she then passed into the hands of ‘Desperate’ Dan Gower of Cardiff just after the First World War, probably about 1920.  Subsequently she received a major re-fit in Carver’s Yard, Bridgwater in October 1927.  Further major repairs were carried out in February 1932 again at Bridgwater following a collision in Cardiff Docks.  In 1934 she lost her mizzen mast in a heavy squall in the Bristol Channel, also the topmast on the main so she then carried a sloop rig until unrigged and motorized in 1949 in dry dock at Saul, with her timbers also being strengthened.   In the interim she had passed into the ownership of Silveys of Bristol, a major Coal Merchants in the City and eventually came to be used as a dumb barge, again probably for coal mined in the Forest of Dean.
She remained in work for a further ten years or so until coal production in the Forest gave out in the 1960’s but then Jonadab, like so many of the other Severn Trows, was laid up on the banks of the River Severn, although still in fair repair.  Although still in very good condition in 1973 and with several projects proposed to restore her (including interest from the Maritime Trust) her condition then gradually declined.  At some point she floated off at a spring tide where the current took her to Sharpness where she blocked the docks entrance.  She was towed back close to Lydney and beached high up on the foreshore where she gradually deteriorated.   Several of her timbers were salvaged and were incorporated in the construction of the bar in the Lydney Sailing Club.
With the passage of time I am obviously now disappointed that I did not pursue my interest in her much earlier, even if only to see what remained on the banks of the Severn, but such is life.
I was particularly interested to learn that you regularly conduct guided tours of the remaining hulks at Purton and my wife and I would be keen to come along in the not too distant future and have a look.   If there is any further help I can provide please let me know.
With kind regards
Richard James

From the west Briton & Cornwall Advertiser. Thursday evening, 1905.
Lifeboat Claim Settled.
The Admiralty proceedings instituted in the Truro County Court against the owners of the ketch JONADAB of Bristol, by the R.N.L.l., have been settled. lt will be remembered that the Padstow Lifeboat EDMUND HARVEY was lying at her moorings at Padstow, when the JoNADAB’ in entering the harbour, fouled the Lifeboat, causing damage which necessitated repairs to the extent of £13.16s.0d.. Other expenses brought the claim of the lnstitution up to £20.4s.0d.. As a result of negotiations between the solicitors concerned, the action has been settled on payment by the defendants of f16 and costs’ Richard also advised he owns Eric picture of vessel on the bank c.1973 Remains floated on high tide c1965 and can confirm parts sailed to Sharpness (eventually recovered and taken to above bridge) and above yacht club. Took photos of remains in 2000

Our photos of Welsh Back feature the ketches Jonadab (PBA409),

CL recalls that the former wooden trow Jonadab was once crewed by Ben Pride and was originally beached on the Lydney foreshore. However she subsequently refloated and drifted across the estuary and foundered between the Sharpness piers.  Following her subsequent recovery, CL states that she was towed and beached at the end of the wall at Purton.  Furthermore and upon questioning CL recalls that “the stern part submerged on breaking away from Lydney”, this in turn was recovered from the basin and “ended up in sand by Teddy Lanes Bungalow”

First let me thank you for your excellent talk yesterday evening about the history of Lydney and the Severn trows.

As I told you, my great, great uncle, William Guy, was Mate on the Jonadab in 1870 and 1871.  His uncle James Guy was the Master in 1870. This is recorded on the Bristol Crew Lists, and in 1871 they were recorded on the Cardiff census on board the same vessel.  John Guy, father of William, was master of The Happy Return in 1870.  In 1886 William Guy appears as Master of the Swan, with his son, also William, as Mate.  Just out of interest, after William retired and lost his wife he went to live in the Merchant Venturers’ Almshouses in King Street, Bristol and for many years was the Chief Brother.

I was delighted to see photographs of the Jonadab, and should be most grateful for any information or photographs you are able to send me.

Thank you again for a most interesting evening.

LW states that the former trow Jonadab was a well-known and frequent visitor to Bristol and is now beached at Lydney.

Furthermore his MNL 1928 states that she was built in 1848 rebuilt in 1895 of 68grt and was owned at that time by Capt. William James of Saul

I’ve been looking in to the history of trading on the River Blackwater in south-east Ireland. Schooners came from Wales to deliver coal and collect pit-props.

I came across the attached photo described as “The Jonadab (Schooner Brig) on the River Blackwater at Templemichael with Ballynatray House in the background.” A “schooner brig” seems an unlikely beast; it looks ketch-rigged to me. I note that you have found the hull of a Jonadab at Purton; could this be the same vessel?