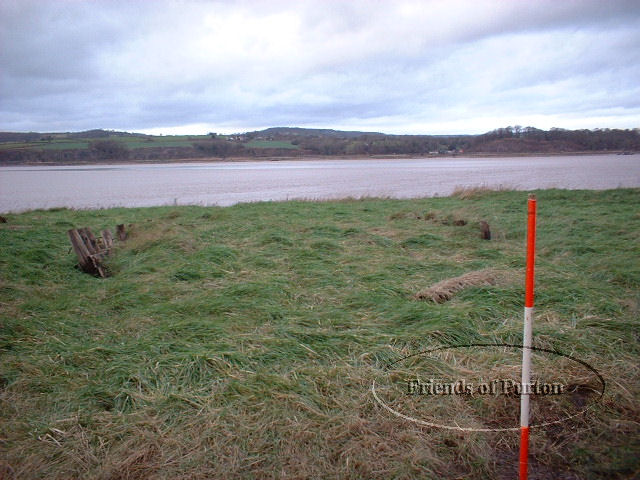 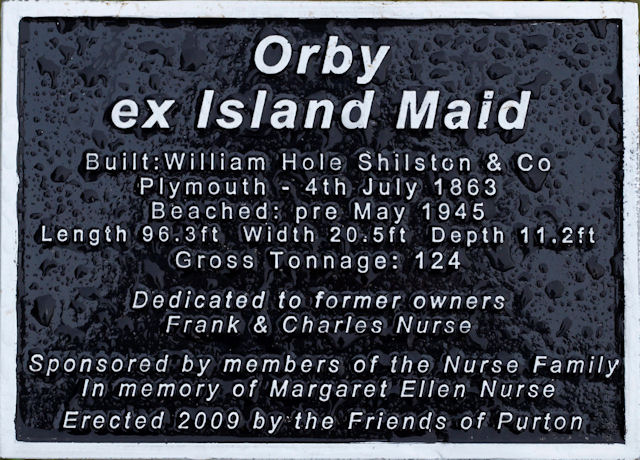 Once considered the pride of the Plymouth fleet following her carvel construction in 1863, the Island Maid is surely a candidate for coining the term Hearts of Oak. Fitted to Lloyds Class A1 registry in July of that year (a class she maintained until 1907), she was initially yellow metalled and operated in the Mediterranean trade, possibly as a fruit schooner where speed was all important to deliver the precious cargoes in good order. That said her sturdy construction would have placed her in good stead whilst employed in the booming cattle trade from the southern Spanish port of Corunna to the south coast as outlined in the following extract by Basil Lubrook in the 1927 publication Last of the Winjammers Vol. 1

Before going onto the fish carriers, there were some little schooners running out of the channel which deserve a mention. The first of these were the cattlemen. Between 1855 and 1880 cattle were imported from Spain for the Army and Navy commissariat. The contract was in the hands of a Simon Hine, and he chartered a lot of little schooners, which picked up cattle at Corruna and landed them either at Falmouth, Plymouth or Portsmouth.

The following were the best known of these cattle schooners: Pandora of Salcombe, Little Vixen and Elfrida of Plymouth, Sam Slick of Brixham J. B. Gray and Little Dorrit of Fowey, and the Florence and Hezibah of Truro. These little vessels carried 60 head of cattle, the bullocks standing on the ballast, which was stowed on top of the water tanks. Back and forth across the Bay of Biscay, these little schooners plied the year round. Little Dorrit was considered the fastest, but the Little Vixen once ran from Corunna to Plymouth in 36 Hours…… (Lubrook, pp 445 446)

This in turn makes her almost complete destruction, at the hands of scrap metal collectors c. 1953, all the more poignant especially as it is felt her sturdy oak construction would have survived relatively intact whilst positioned well within the upper reaches of the littoral zone and free from all of the highest of tides. Instead and albeit of the sparsest remains of her rudder stock, the 95ft Island Maid has been completely eradicated and her location is hidden to all bar the keenest of eyes via a slight hump with in the rivers grassed bank.

To this end, the author firmly believes her keel and bottom boards remain in situ and as such worth of further investigation and study.

Gone but emphatically not forgotten

Born of national pride in the cradle of British shipbuilding tradition, the Island Maid specifically constructed to ply her trade under sail to foreign ports. Early records shows that she was actively engaged in the Mediterranean trade and as such had been sturdily designed to tackle the mountainous seas which were known to frequent the infamous Bay of Biscay. During this time she remained firmly in the ownership of her Plymouth builder and shipping dynasty, Shilston & Co, and later W. H. Shilston who finally relinquished family ownership in 1884.

Despite her many successive ownership changes, The Island Maid remained Plymouth registered until eventually being purchased by Gloucester based ship owner and ships master Alexander Johns in 1903 who continued to trade her until having her recorded as demasted and hulked via the Plymouth Register 21st March 1907

Little is known following this until her arrival at Gloucester in 1917 – 1918 but intriguingly a vessel called the Island Maid was saved by Padstow life boat 12 Oct 1911 Was this Purton’s Island Maid? Research is ongoing

What is known is the Island Maid was never registered but re-registered as the Orby in the Gloucester Registry in September of 1917 and again in the Mercantile List as a barge in the ownership of Gloucester based lighter man G. T. Beard (1929) Ltd. She continued in this guise transporting timber on the S&G canal until her register was eventually closed 17th October 1947. Readers should however note that this register entry has been proven to be incorrect, as recently discovered aerial R.A.F. photography records the Orby in situ on the foreshore during a 24th May 1945 photographic survey. 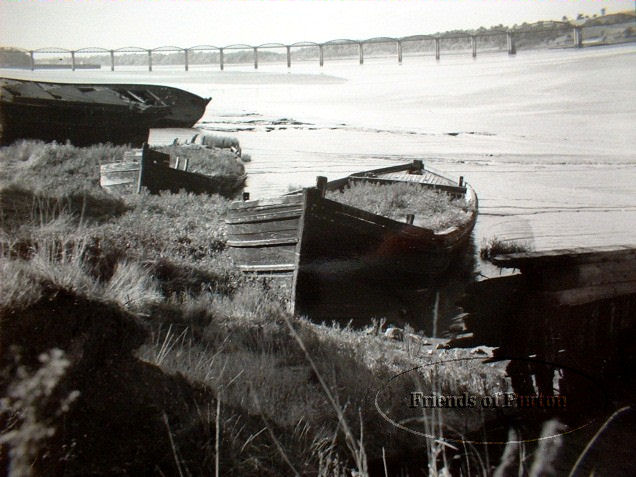 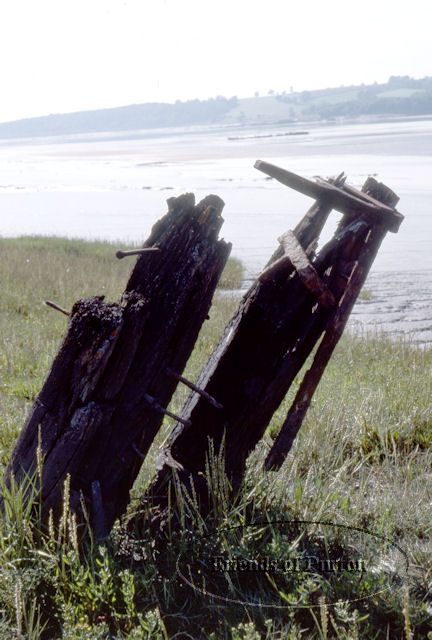 The rudder post of the Orby 1967, The Norman Andrews Collection 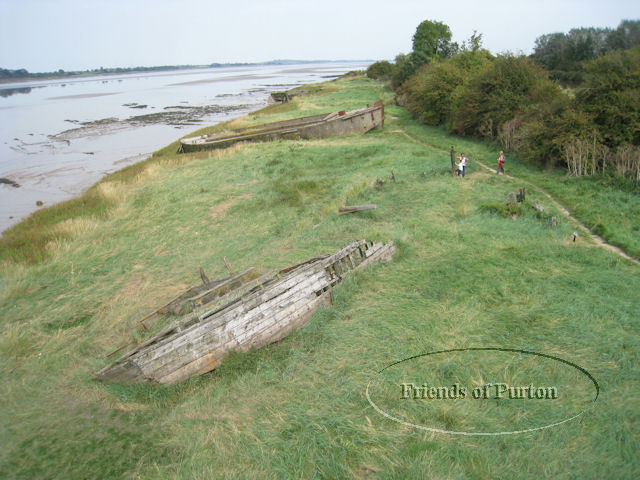 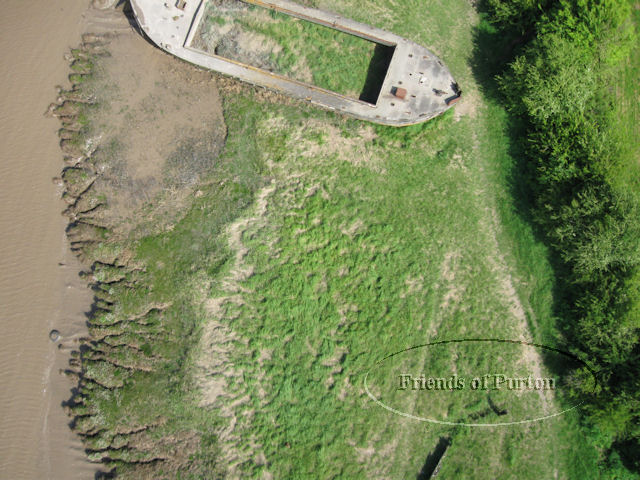 The sea of green, The Hamish Fenton Collection 2009 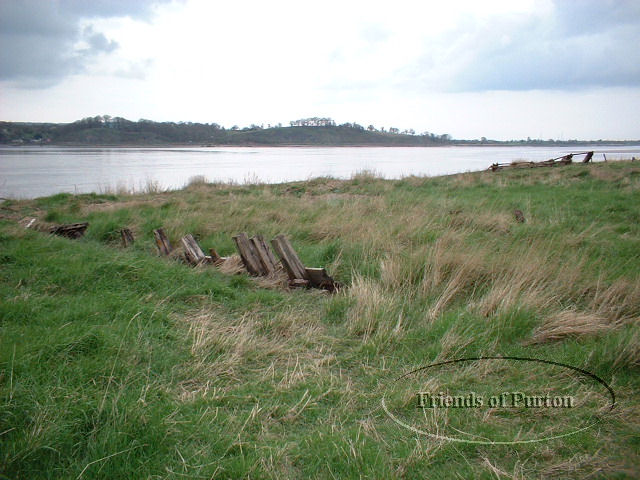 Once the pride of the Plymouth fleet 2009, The L. P. Barnett Collection

From the Oliver Hill Notes

From the Oliver Hill Notes. Folder 12
An interview with Wilf Rowles

OFF NO 45708
In our local graveyard we have the hulk of the little ISLAND MAID in which my father first went to sea at the age of 13 for 2/6 per month and found. They were engaged at that time on the cattle run to Corunna.

Crew member of the Tugs Addie, Resolute and Primrose. Date of interview 19.06.03

Charlie identified this vessel as being on the bank at Purton and recalls that she was a large vessel with long and narrow strakes and originally powered by a steam engine, however he further states that he always recalls her as a towed barge.

Author. Date of interviews 20th March 2003 & 10th July 2003
David made a verbal/visual identification of the remains of this former schooner and stated she was possibly a sister ship to Shamrock due to elliptical stern. Later he identified her by name and stated that there was very little of her left at his 1952 visit and that her entire forward section had been destroyed by fire missing (photo).

The Island Maid was once owned by the Nurse Bros of Gloucester and was in the Corunna cattle trade to Penzance. Giles Nurse was master, Archie Nurse and his cousin Harry Rowles, (author’s Father) were boys in her, their pay being 2/6 per month and found. At this time she was also in the Mediterranean trade. She was eventually reduced to a barge and was running from Sharpness to Gloucester as a timber lighter and then about 20 years ago, she was taken to her final resting place at Purton, the local Ships Graveyard to act as a breakwater on the bank of the Severn. She is now practically all gone.

The Island Maid came under the Nurse ownership around the middle 1870s and was used by them in carrying cattle from Carunna to Penzance. My Dad went to sea in her at the tender age of 13, along with cousin, Archie Nurse. Their pay was 2/6 per month and found, the work consisted of cooking for the crew, tending the cattle for this princely sum.

What a job, rolling down across the Bay of Biscay. They usually took coal out to Lorient. On one particular trip, Capt Giles Nurse, Archie’s Dad, put the boys in the hold shovelling out the coal into baskets. Having a flowing white beard, he reminded the boys to work hard whilst he was away at the brokers. Sometime later, father looked up and saw an old gent looking down at them. Turning to Uncle Arch, he said “who is that old bugger up there”. Marched to the Master’s cabin and given a dressing down, father discovered the old bugger was none other than Capt Giles minus his beard. I liked Uncle Arch, he was very good to me when he was a kid and took me to play marbles by flicking them under the thumb.

Years afterwards he became Master of the Bristol Channel sand dredger Saltom. They had just finished sucking down off the Holmes and Uncle Arch went to his bunk for a lie down, several hours later, he was found dead with his glasses still on his nose. I know it upset my dad for a long time after. They were all marvellous seaman and straight as gunrods. We shall never see the like of them again. They were far better than the moderns will ever know how to be. It was a fantastic experience to be away at sea with them. Seldom did they use a chart, light buoys and beacons being rattled off the tongue as one proceeded.

The vessel was not in the MNL after 1907, so it is presumed that it was at this time that she was stripped down and became a lighter on the Gloucester to Berkeley canal under the ownership of GT Beard, being then re-named the Orby. She followed the Guide to the Purton Graveyard, and up to a few years ago, the rings to which the cattle were tethered, could still be seen.

Unfortunately the ravages of time have dealt harshly with this lovely lady. She had beautiful lines, and in her youth is credited with a fair number of deep water passages, it was nothing for the Nurses to sail to South America and anywhere around the Mediterranean. Uncle Archie Nurse and Dad were boys together in this vessel, earning the magnificent sum of 2 shillings and 6d per month and their grub. No wonder they were grand seaman, all of them, really iron men in wooden ships.

Wilf further provided the following from Graham Farr of Portishead.

Her first master was W. Hill and she was registered at Plymouth until about 1906 when for some reason unknown to me her registry was cancelled. And it was presumably in 1907 that she was turned into a lighter. Then 1917 she was re-registered at Gloucester for Geo. T. Beard.

Skipper of the tug Speedwell and canal man date of interview 29.06.03
Ray remembers that G. T. Beards use to own the Orby and used her to transport timber.

Guide. Schooner 136 R/T ON 25803 Int Code PHMD.
Dimensions 98.0’ x 17.7’ x 11.2’. Built at Dartmouth in 1854. Restored in 1873 and was then F & YM overpart. My 1882-3 Lloyds Register gives her master as Elliot, her owner as F Nurse, P/R Weymouth. She was under the Nurse ownership for a good many years, and was engaged in carrying cattle from Corunna to Penzance. When Capt George Nurse was master, she was coming down the Irish Sea and he went aloft to look for the South Stack Light, it being mucky weather, when he slipped and fell overboard, never to be seen again. Aunt Pollie Nurse formerly Rowles, his wife, was about to leave Saul to join him somewhere when she received the sad news. It is reputed that the vessel became a total loss in the River Ribble, Lancs, when bound to Plymouth with a full cargo of coal from Preston, but such is not the case. Whatever troubles she encountered, she came back to Saul and was stripped down, being purchased by G T Beard of Gloucester, who changed her name to Shamrock. She worked on the canal between Gloucester and Sharpness until the middle 1930’s, when she was taken to the Purton ship graveyard, a couple of miles from my home. She can still be recognised as one of the lovely little ladies of Severnside, in fact I crawled around her only a month ago. Speaks well of the builders to last over 120 years.

Skipper of the tug Speedwell and canal man date of interview 29.06.03
Ray identified the Shamrock by name and recalls that photograph was taken by local man Jobert Miles.

David failed to record the vessel during his early 1957 survey, however he did record the official No. 45708 on the wreck upon his return in 1959. This however was not repeated in his later visit of 1961 and as David suggests this may be a result of her timbers being destroyed, sunk/buried or indeed being removed in some other way. This however is further confused as he once again recorded timbers in this approximate location during his final visit in June 1965 as “Stern and timbers of wooden vessel”