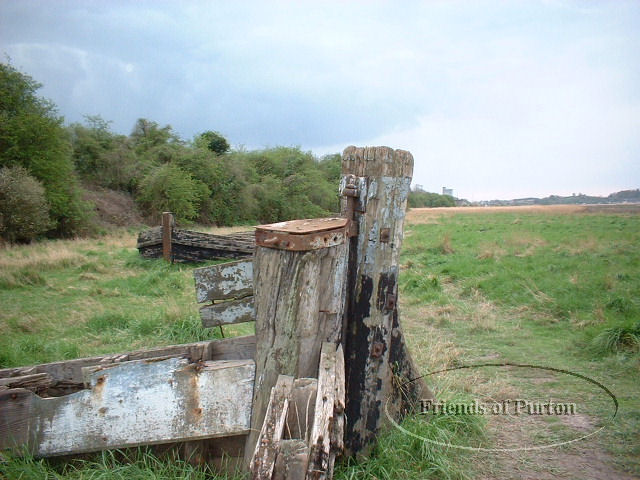 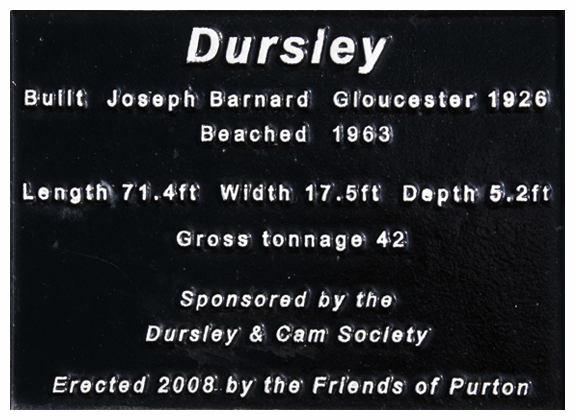 The wooden lighter, Dursley, was a late arrival to the G.T. Beard fleet and a legacy for her builders Joseph Barnard, who, by the time of her construction in 1926 had honed his craft and relocated to his purpose built yard at Monks Meadow, in the heart of Gloucester. Although the Stroudwater Canal would soon be in decline, the Dursley remained faithful to her Stroudwater barge line, albeit her sturdier construction could no longer be accommodated by the Stroud waterway’s restrictive lock dimensions.

Instead, both her builder and owner chose to concentrate on the more profitable Sharpness to Gloucester Canal and Gloucester’s continual hunger for timber. This was duly reflected in the construction of the Dursley’s wider beam and sturdier gunwales, which could easily accommodate loads of up to 40 ton of timber deals that were routinely stacked in 20ft rafts.

The downside of this practice, however, was that a fully loaded Dursley required the incorporation of ingenious steering platforms, scaffold style, made from the timber deals themselves. The resulting problem of the helmsman’s lack of vision was resolved, but not without cost, as these high platforms provided very little protection from the worst of Gloucestershire’s elements.

The Dursley is another example of high beaching and heavy deposition that, in turn, has removed it from the real dangers of the Severn’s destructive forces. Evidence to support this can be seen by her almost complete construction, well preserved grown rudder timbers, right down to traces of her Fred Ashmead livery paint.

Sadly, as a direct result of the complete destruction of the adjacent Bridgwater trow, Edith, amidships on her port side, her bows were virtually consumed by that same fire and very little remains above the swath. However, the author is confident that enough remains of this once proud Gloucestershire towed vessel, which ironically bears the name of the nearby, and equally proud, Cotswold town, famous for motorising the vessels we know today.
Old meets new, or it will do if allowed to.

Sturdily built of Forest of Dean oak, in 1926 at Monks Meadow, Gloucester, by J. M. Barnard, the Dursley joined the fleet of the city’s premier stevedore George Thomas Beard who began his domination of the region’s lighterage operations in 1910. Sadly, so it seems, at the peak of his fortunes G.T. Beard died prematurely in 1927, after falling down stairs at his Southgate Street home.

As a result, the successful company changed hands to his two sons, who sensibly continued to employ John Cooke, their father’s former trusted employee, as barge manager and to handle affairs. The following years proved so successful that in 1947 John took a chance and bought the business, which he duly handed over to his younger brother Benjamin Cooke (later to become Lord Mayor of Gloucester, c1957). Despite the change in family ownership the Cooke brothers retained and continued to use the company name G. T. Beard (1929) Ltd.

Business, though brisk, sadly, hit hard times and eventually, in 1955, G T Beard went into liquidation. At this time the company’s aged fleet was either broken up or sold and several of the company’s lighters were destined to be abandoned at Purton and Lydney. This, however, was not to be the fate of the relatively young Dursley and she was purchased and absorbed into the then successful Bristol lighterage company, Fred Ashmead & Son, via his surviving sibling, Hubert, which became Ashmead & Sons Ltd. of High Elms, Stoke Park Rd, Bristol.

In light of this apparent reprieve, the Dursley was promptly put to work supplying wood pulp to a Bristol packaging giant at St Annes Board Mills. Sadly, this was but a stay of execution and the Dursley once again lay redundant, partly due to the factory changing to oil fired furnaces in 1961 and partly to the use of cheaper and more efficient road networks.
As a result, she made her final trip into the turbid waters of the Severn some time during 1963 and on up to her final resting place to rejoin so many old friends. 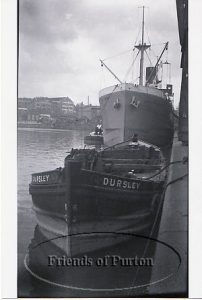 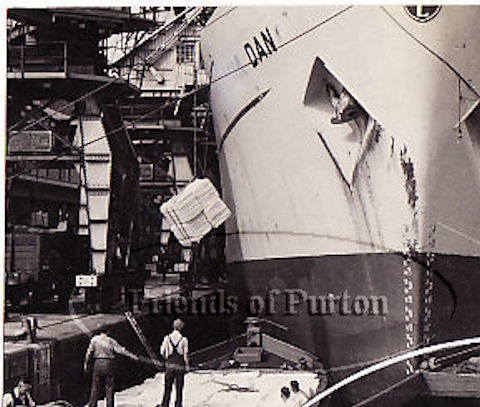 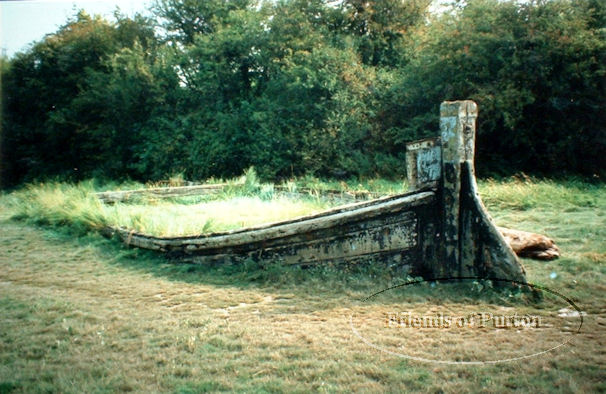 The Dursley 1982, The House livery of Fred Ashmead remains to this day, Ron Cowl Archive 1982 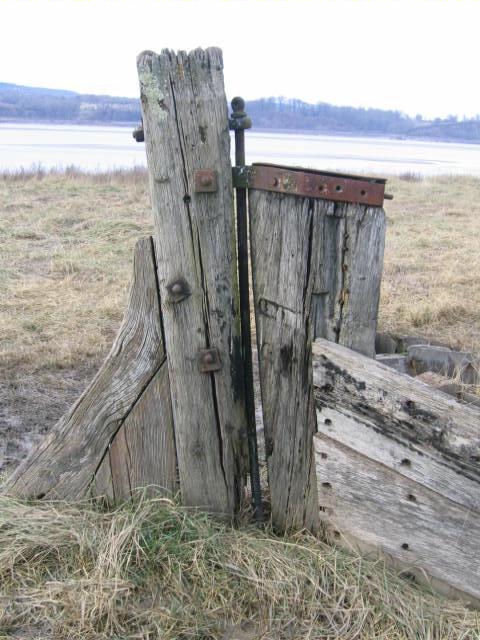 Stern of the Dursley - colours faded but still to remind us, L. P. Barnett Collection April 1999 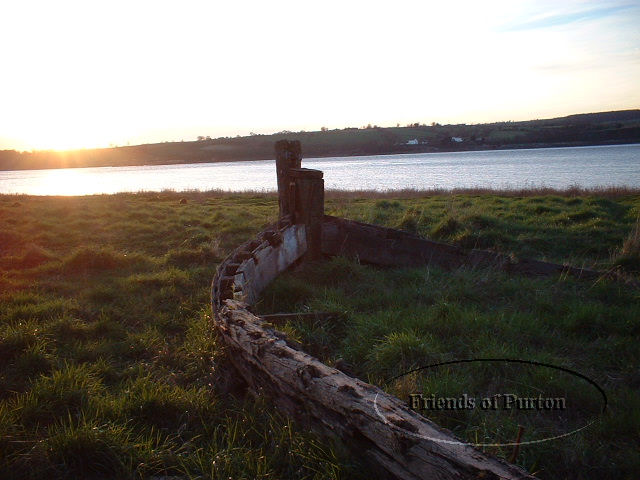 At the going down of the sun - we will remember, L. P. Barnett Collection April 2002

Bristol maritime enthusiast Jim Crissup identified the Dursley Reg: F. A. Ashmeads & Son Ltd
as being located during his 1986 survey

Fred Ashmead Superintendent, Interview 17.02.08
Ken recalls that the Dursley was owned by Ashmeads and was employed in carrying 40-60 ton of wood pulp to St Anne’s Board mills until they finished trading in 196?. At this time due to it weak timber construction it was then taken and beached at Purton very soon thereafter.

Maritime enthusiast
Advised Bristol Industrial Museum, holds a photo of a cargo vessel unloading with the barges, Mersey, Dursley and Diamond No 78 Bristol registry along side.

British Waterways as Suction Plant Operator, Date of interview 10 May 2003 and 8 June 2003
Dick is quite clear when he recalls that “Edith recognised next to Dursley below that is Harriett …… which they tried to float at one time using a excavator too dig it out” and he went on to state that “Edith, Voltaic, Dursley and Harriett are all identified as being there in lower reaches, possibly late 50’s early 60’s.” Further he recalls that the Dursley was beached just below Edith by Eric Aldridge and Doug Munday.